What are workspaces, and how are they different from subaccounts?

Written by Ben Verbeken
Updated over a week ago

One of the feature requests we get most is team accounts: the ability for multiple users to access, organize and edit floor plans. Workspaces are a first step to make that possible.

What is a workspace?

A workspace is a collection of seating charts and related events. A workspace also has a unique name (the workspace name) and a secret and public key (a.k.a. the workspace key).

Users have access to one or many workspaces. Once logged in, users can switch between workspaces, create new charts and events, copy floor plans from one workspace to another, etc.

What's the difference between a subaccount and a workspace?

A sub-account is really a user and workspace combined into one. We are pulling these two concepts apart as of today, to make it possible to introduce proper team accounts. 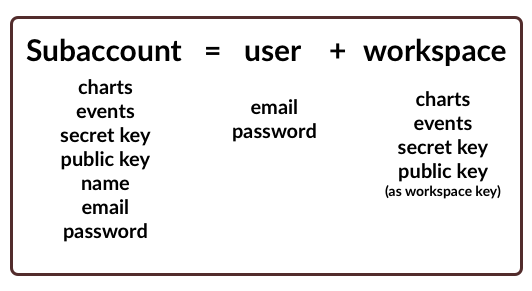 That means sub-accounts will disappear in the very near future.
But no worries, see 👇

What about existing sub-accounts?

All existing sub-accounts have already been converted to workspaces in the background. For almost every one of our users, workspaces can be considered to be drop-in replacements for sub-accounts.

The only exception is if your sub-accounts have an app.seats.io login (i.e. you entered an e-mail address for them). In that case, you'll still have a sub-accounts menu item, and be able to create and update sub-accounts like before. Only for a short while though, until we add the ability to create regular users and give them access to multiple workspaces.

What does this mean for you, as a seats.io user? For now, nothing - we have changed the name of sub-accounts into workspaces and you can access them and use them exactly as before. Later, when we move to the next stages (see below), you'll be able to do a lot more, though. Always in the spirit of providing new features while keeping backwards compatibility.

Did this answer your question?